The book in question is the first of the series, and in principle should cover the long time interval from 1415 to 1441. Unfortunately, its second part has been severely damaged and only the lower part of the pages can be read; moreover, the records themselves are there less detailed and complete. The handwriting is less fine than average, everywhere, but in the second half of the book it becomes hard to read. In conclusion, we should be satisfied, at least for the moment, with the few years for which I have been able to get the data of the following Table. As in other notes, the date is expressed as 14yymmdd and the price everywhere in soldi, with an approximation to hundredths of them, which did not correspond to any coin of the time (thus, for ex. s.8,67 should correctly be read as s.8d.8).

As mentioned before, the main reason of satisfaction is that these years are so early for playing card production that these new data become particularly interesting. This is evident just at the very beginning: thinking for July 1415 of a single purchase of no less than 240 Naibi packs, to be further sold in Lucca, is probably much more than anybody could have expected. Apparently, a local production was necessary to support a similar trade, and not of the kind of the single cardmaker who little by little produced one pack after another in the course of several months, as we were ready to expect.
I have already discussed the various attributes associated with naibi.(6) Dozzinali, sold by the dozen, is a clear sign of a rather low quality. Here we have both normal packs, needing no attribute, or provided with that of Dozzinali, and Vantaggiati, those of a better quality.
The corresponding costs should indicate if the better quality was on its turn a standard quality at a superior level, or instead the Vantaggiati attribute was used for several nuances of increasingly higher quality. For these cards, the indication is somewhat confounded by the presence of different sizes too, with different prices on their turn. However, the impression deriving from the various prices present here is that several degrees of better qualities were present.
As for makers, we find only one of them mentioned here: the entries with packs made by him are only about one fourth of the total; however, the proportion greatly increases, up to about three fourths, if the number of packs is taken into account. His name, Antonio, is the most frequent among Florentine cardmakers. However, in 1415, several of the cardmakers with the same name, whom we find in records of later times, were too young or even not yet born.
Unexpected is that we do not find this maker associated with the more expensive cards; on the contrary, he seems to have been able to provide this seller with great quantities of standard cards, to be sold at the lowest prices of the market.
No pack of the Vantaggiati quality is indicated with its makers name. It is apparent however that these were supplied by at least a second maker, and a confirmation we find below, when dealing with packs acquired.
The purchasers are also interesting. They are always indicated with name and profession, sometimes with their place of activity too. The profession is often the same or similar to that of the suppliers, Merciai, let us use the literally corresponding term of mercers. We could thus be in the presence of a trade from gross-dealer to retailer, but  at least for our Naibi  it seems rather to have been a trade among retailers.
When the place is not indicated, we can assume it to be Florence. La Lastra I prefer to associate to a small village close to Florence in the North direction, rather than Lastra a Signa, farther to the West. Lucca is easy to identify, even if I had no idea of any such predominance for the destination of these sales. Among the purchasers, this big town is even represented by two different mercers.§ In particular, we can verify that these purchases occurred at short intervals of time - this implies that these cards were quickly sold out in Lucca.
Of course, these data are not enough to deduce that in other towns, of dimensions similar to Lucca, some local production of cheap cards had been established already. I would only deduce that any such activity was not yet developed in Lucca, whichever its cause could have been.
The prices that we find recorded are also of great interest, because we (or let me better write I, to be sure) had no idea how expensive Naibi packs could be at the time. Surprisingly enough, what we find here indicates that the production was already established at a level comparable to that of one or two generations afterwards. The Vantaggiati packs apparently corresponded to the Fini packs of later years; this is not surprising  surprising may be that their prices were of the same order. Even more unexpected is that Naibi Dozzinali were already produced at such low prices, as we know for later times, when the total production seems to have greatly increased.
At the time, there was some inflation in the cost of living and the same nominal prices for 1415 and 1450 did not have the same real value. However, the difference can be dealt with as corresponding to a second approximation, and an increased precision in comparing prices can be delayed to a following study.

Information on cards acquired by our mercers is more difficult to detect in the book, because the corresponding trade is of a different kind. Packs are typically sold directly by cardmakers, who used them for "paying some goods previously acquired in the store. This "payment occurred, as usual, in successive installments, which could be recorded in the course of several months, as follows. 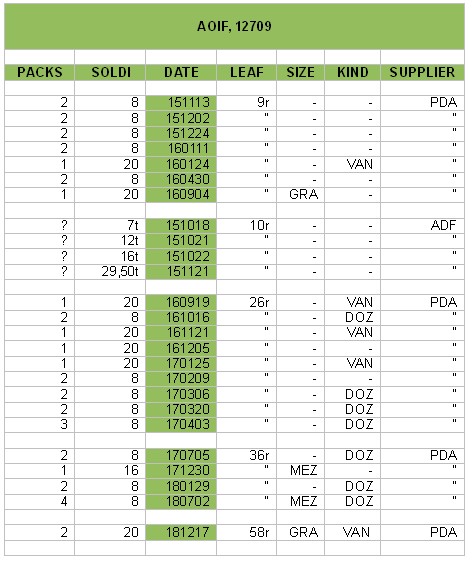 In the Table, a letter "t" after the soldi amount indicates that this is the total amount in soldi paid for an amount of packs that was not recorded. We are in the presence of two makers, Piero di Antonio (PDA) and Antonio di Francesco (ADF). The latter was likely the same indicated above as the maker of several packs sold in the store. We find only the record of the total price of his cards here, without any indication on unit prices. Piero di Antonio, on the other hand, appears as the supplier of the more expensive packs. Apart from one case of Naibi Mezzani recorded at 16s., all his packs were either Dozzinali, priced however as high as 8s., or Vantaggiati at 20. Apparently, he was not yet involved in any mass production, and the slow rate of his supplies may be a confirmation.
In other words, the two makers here encountered can be assumed as representative of two different ways of production: many packs of inferior quality or few high-class packs. Unfortunately, we do not have further data up to now, coming from any other cardmaker, already active in the town. We can however imagine that any additional maker, if already existing, could have employed one of the two mentioned kinds of production.

In the second book examined, we find a different and more familiar situation, corresponding to the middle of the 15th century. This is easier to compare with other account books already studied. However, there is something unusual in this book, which is thicker than similar ones, with more than three hundred leaves. It seems that the trade changed in the time of these records, with increasingly more entries concerning production rather than small trades of the shop. I have collected in the following Table all the packs that I could see in the book; namely, in its initial part.

We can observe that low-quality packs still exist, but have rather become an exception among packs recorded here; only one dozen packs priced less than 2s. are present in the entries that I have seen in this store. Also at the other extreme we find a reduction of entries: the most expensive packs are a Naibi Doppi at 16s. and a Trionfi Grandi at 16s.6d. Other Naibi packs have prices in the middle range.
Interesting is also a case in which we see three Naibi packs acquired and sold on the same day, 27 December 1453: this immediately provides us with the information of the small mark-up adopted in this trade, less than 10%.
The appearance of Trionfi is remarkable; as it was easy to expect, they are priced higher than corresponding Naibi. However, we may note further details: apparently a price of 14s. had already become a standard price for them. These Trionfi seem generally to correspond to the Mezzani size, even though this is explicitly stated in just one occurrence; in the only one case in which we find the Grandi size indicated, the corresponding price only increases from 14s. to 16s.6d., still below that of several packs of Naibi Vantaggiati.

Information is provided on the early trade of Naibi: both numbers of packs sold and corresponding prices appear of some interest. It may be surprising that we begin in 1415 with a sale of no less than 240 packs of Naibi to be sold in Lucca. Also information on Naibi packs acquired in the store is interesting, because in this part of the trade the cardmakers themselves were involved in person. From a second account book, some new data have been taken for the years 1453-1454, when Trionfi were sold as well as Naibi, at comparable prices.

Side bar pictures and text added by Lothar Teikemeier