The countless books and files kept in the Archivio di Stato di Firenze (ASF) have been variously ordered and catalogued. Of course, when a recent and detailed inventory exists, it can make any research much easier. This has been the case for the archive section Libri di commercio e di famiglie. At the ASF we have now available a big work, bound in four volumes: Inventario N/422 Libri di commercio e di famiglie, edited by Vanna Arrighi, Stefano Calonaci, and Veronica Vestri. 2008, 1843 pp.
I simply checked carte da gioco in its subject index and found there marked items 152, 153 and 154. Item 154 is actually formed by a lot of slips of paper with receipts that I leave to any interested person for future study. On the contrary items 152 and 153 have immediately caught my attention: they are twin pieces, each formed by four registers, one for each of the four manufacturers of playing cards active in Florence. The four registers of item 152 correspond to the year 1839; the four of 153 to the year 1841. Thus, the uncertainty present in the title of this note is solved: we dont have exactly the production of 1840, but we have the data for both one year before and one year after it.
Each register is a kind of counterfoil book that has on the left page the quantity of watermarked paper sheets received by the maker and on the right page the amount of card packs produced. In order not to repeat on each page the heading of each column, we have the outer pages at full height with headings, whereas the inner pages are cut for a few centimeters at the upper edge, so that one can leaf freely through the inner pages having always in view at the top the same headings of the outer pages.
What is of the greatest interest for us in the pages on the right side is first which are the columns devoted to the various kinds of card packs and second how many packs are noted within each column. For both years and for all producers we have a standard pattern consisting of seven columns. Obviously the production is not equally distributed among these seven kinds of card packs. On the contrary, there is even one column to which corresponds no production at all. Apparently, this was used years before, but at the time had become useless.
Which were the seven different card packs? We can group them into several categories. First, there were carte piccole (p), carte grandi (g), and minchiate (m). The seventh and last column was devoted to minchiate. Both piccole and grandi were in their turn further divided into the same three subgroups: ecarté, quadrigliati, picchetto. These kinds of packs were named after the main game played with them and corresponded to 32, 40, and 52 cards respectively. (Actually piquet was played with the same 32-card pack used for ecarté, and I dont understand why precisely this name was adopted here.)
At present I don't know whether there were differences in the figures on the cards of the different packs and/or of the different makers. I believe that differences existed, but were not remarkable. Let us forget about differences and keep our attention focused only on the differences in dimension (piccole or grandi) or thickness of the pack (32, 40, or 52).
We are now ready to study the data of the seven columns corresponding to 32p, 40p, 52p, 32g, 40g, 52g, and minchiate respectively. Whenever the maker brought the packs to the office, they noted the date and the quantity of the individual packs to be stamped. Usually, this amount was a multiple of a dozen, but could correspond in some cases to half dozens, or to any number of packs.
As a rule, at the end of each month the Revisore delle Carte da gioco wrote the total production of the month within the page, between two horizontal lines. Instead of copying each individual entry in the registers, I limited my attention to these monthly accounts of the whole production. Unfortunately, the monthly production was not always recorded. Sometimes the lines for that were inserted and left blank.
At the end of each year the total amount is marked, at the end of each register. This final count I have obviously copied, when it exists. In a few cases, the final total is not written, but it can be easily calculated by adding to the total of the last but one page the items marked in the last one. It is also possible to reconstruct all the missing monthly amounts on the same basis of the packs noted in the corresponding pages. This I have always done for minchiate, and just in a few cases for the other packs. The values thus "reconstructed" are reported within brackets in the tables below.
At this time Florence provided cards to the whole Grand Duchy of Tuscany, under rigid control by the government. The control worked both uphill of the production with the use of special watermarked card sheets dedicated to card production, and downhill with the stamps marked on a given card of any pack to be sold.
In both of the years documented here the active makers were four and the corresponding factories were listed with a numerical order, which probably was justified by historical reasons: 1. Giovanni Pistoj, 2. Cosimo Adami, 3. Pasquale Falugi, 4. Giuseppe Baragioli. These four family names were known as cardmakers who had passed the profession from father to son. (The Pistoj factory had at the time the smallest production, but was a renowned stationers in Florence later on too, the last of them all to survive  I remember it and I didnt live in the 19th century.)
We are now ready to observe the annual production of the four factories for the two years: 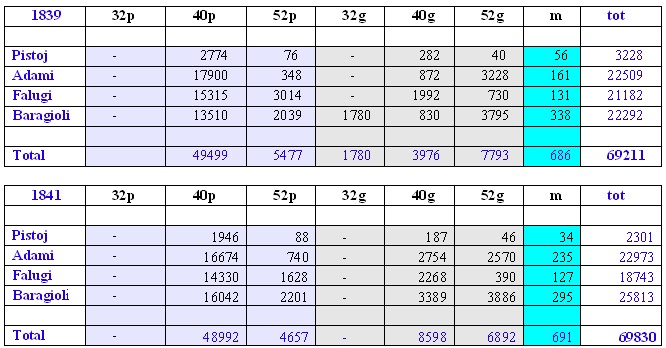 The two tables are worthy of a short analysis, considering both the production of the various makers and especially of the various kinds of packs.
The first factory (Giovanni Pistoj) may be the oldest of them all, but at the moment produces about one tenth of card packs with respect to any of the other three factories, which share instead a similar proportion of the production.
For the kinds of packs we can compare different aspects. First of all, carte piccole corresponded to the largest part of the production, and among them the 40-card pack was by far the best-seller of the seven nominal types. Apparently, the fashion of games played with the 32-card pack was in decline: no such pack was produced any longer among the piccole, and only Baragioli produced some of the grandi in the year 1839 (in particular up to the spring) and no longer in 1841. (Of course, if one had to play a game with that pack, it was possible to discard the additional cards present in the 52-card pack; not however using the 40-card one, where the 8s, 9s and 10s were missing.)

A special attention must be devoted to the seventh and last column, where minchiate are listed. Their production evidently contributes only one hundredth of the total packs. This may appear to be an almost negligible amount. However, we have also to take into account that a given production was still required for these local packs and that their number was practically constant in the two years considered. We know that the practice of this ancient game greatly decreased and practically disappeared when Florence became the first city of Italy in the years 1863-70, but evidently it had already become a game for relatively few addicts one generation before that event.
What seems to be the biggest change between 1839 and 1841 is the remarkable increase of the packs of 40-card grandi, precisely the pack that was to become the most used in the town of Florence (whereas in the whole of Tuscany the 40-card piccole remained the pack most used and nowadays it has fully displaced the grandi, even in the town). 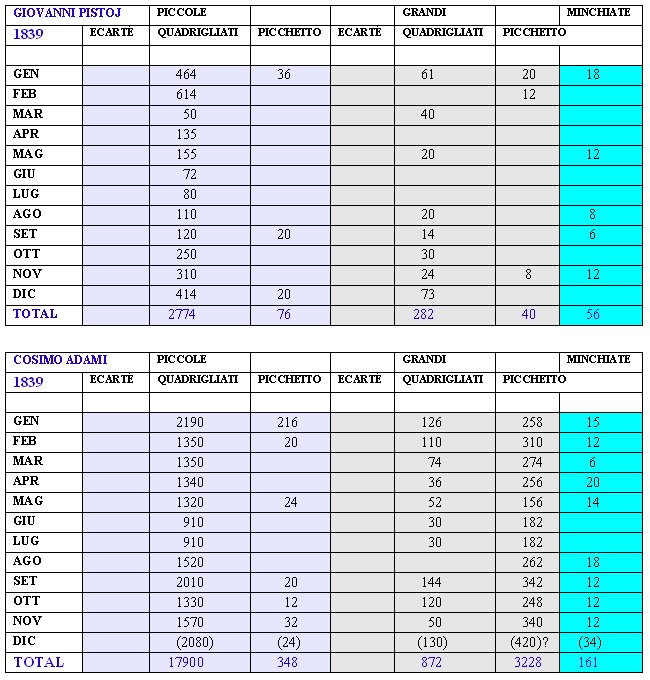 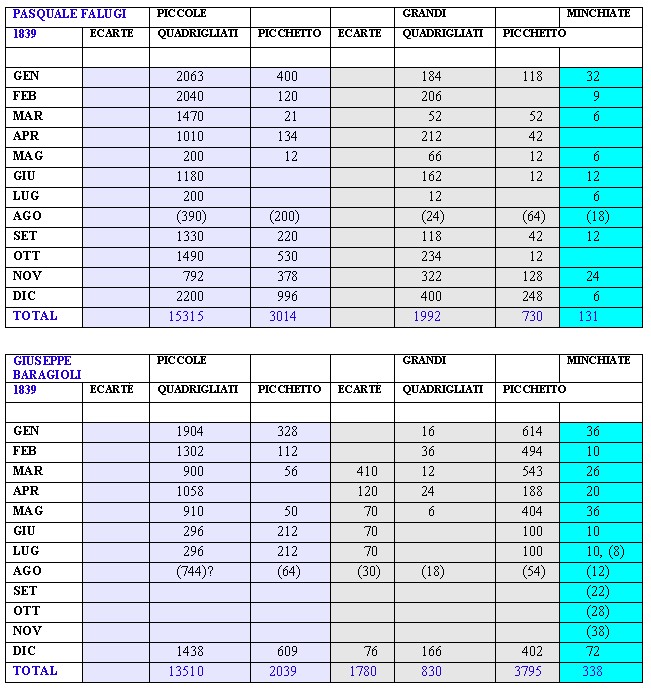 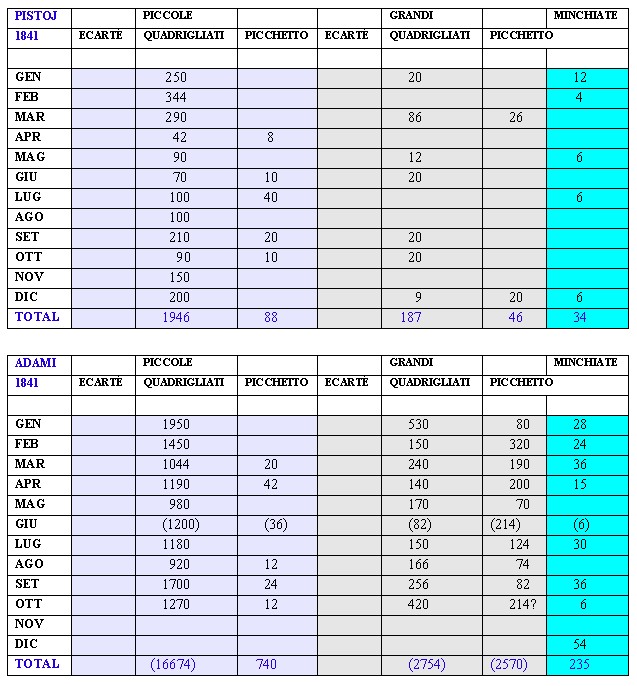 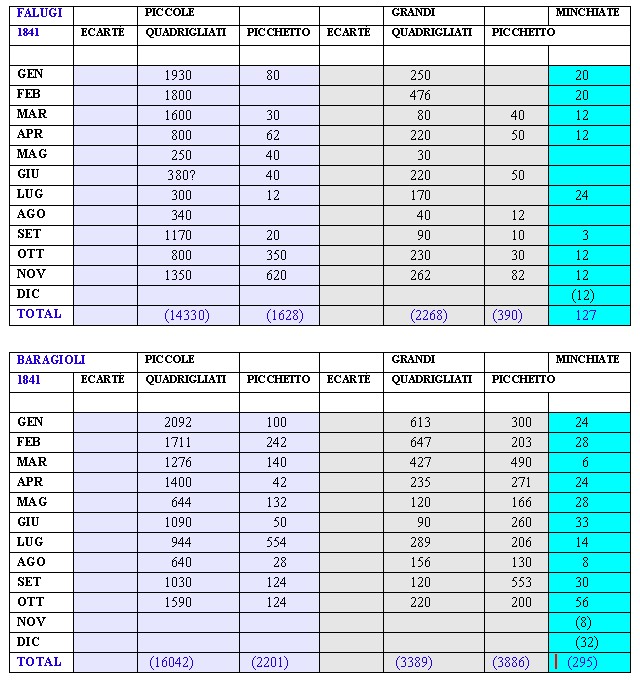